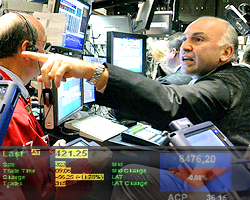 After coming under pressure early in the session, treasuries regained ground over the course of the first trading day of the New Year on Monday.

Bond prices climbed well off their early lows before ending the session nearly flat. Subsequently, the yield on the benchmark ten-year note, which moves opposite of its price, closed unchanged at 0.917 percent after reaching a high of 0.953 percent.

The early weakness among treasuries came as stocks on Wall Street appeared poised to add to the strong gains posted during a turbulent 2020.

Treasuries regained ground profit taking led to a sharp pullback by stocks after the Dow and the S&P 500 reached new record intraday highs.

The rebound by treasuries may also have reflected their appeal as a safe haven ahead of two key Senate runoffs in Georgia on Tuesday.

The outcome of the runoff elections will determine which party controls the Senate and could have a major impact on what President-elect Joe Biden is able to accomplish.

Concerns about the recent spike in coronavirus cases in several parts of the world may also have added to the appeal of bonds, with a new strain of the virus being detected in the U.S. for the first time.

U.K. Prime Minister Boris Johnson has announced the country will go back into full lockdown until at least mid-February as a result of the new, more contagious variant of Covid-19.

Meanwhile, Japanese Prime Minister Yoshihide Suga is considering declaring a state of emergency in the greater Tokyo area to curb the spread of the coronavirus.

On the U.S. economic front, the Commerce Department released a report showing a continued increase in construction spending in the month of November.

Economists had expected construction spending to increase by 1.0 percent compared to the 1.3 percent jump originally reported for the previous month.